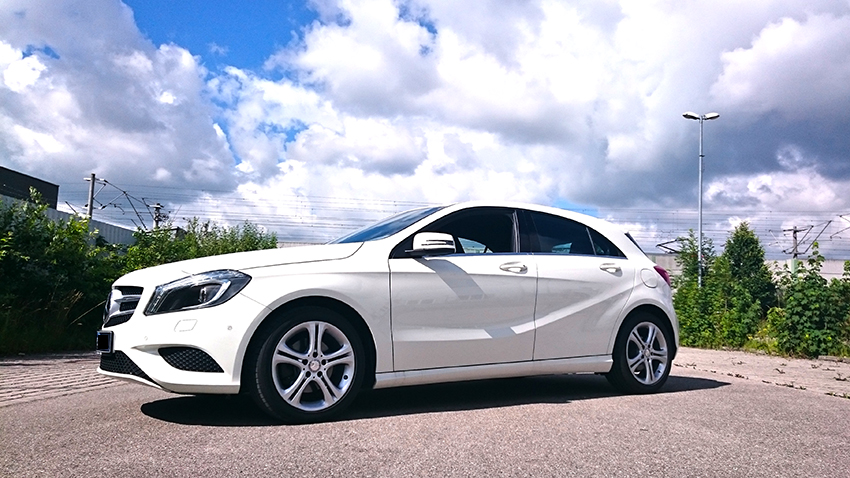 Imagine – it`s a warm summer evening, the sunroof is open, the windows down, a warm breeze blows your hair and you listen to your favorite song while you driving down a curvy county road. No other car near and there and suddenly you face one of these car-stereotypes. A silver A-class from the first generation is creeping down the street in front of you. An old lady or an even older gentleman is behind the steering-wheel and the average speed is 30 mph. Well, thats all over now! In the year 2012 the A-class changed from the well known senior citizen vehicle to a very modern and sporty hatchback with a premium touch. Reason enough for us to offer a brand new coilover-kit for it! But let`s take a look at the car first. 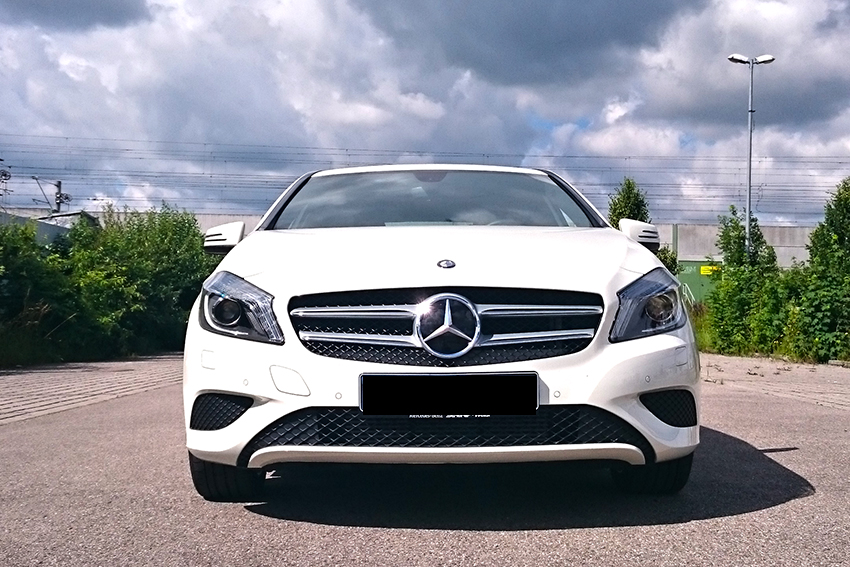 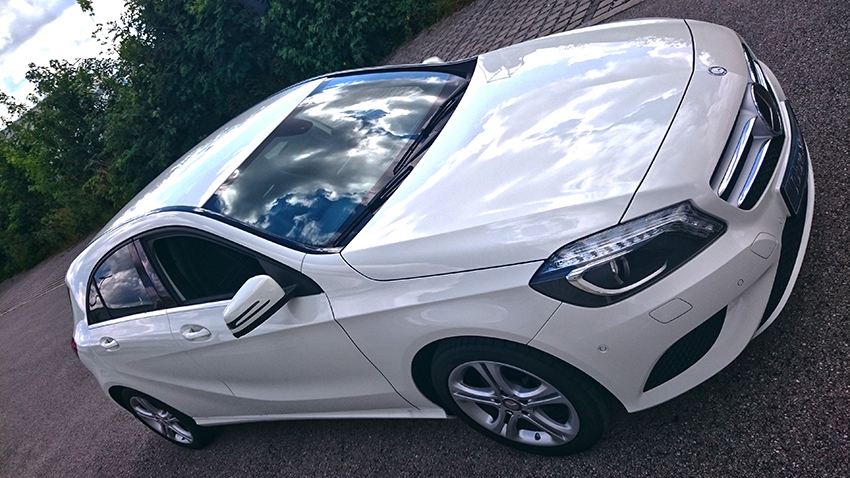 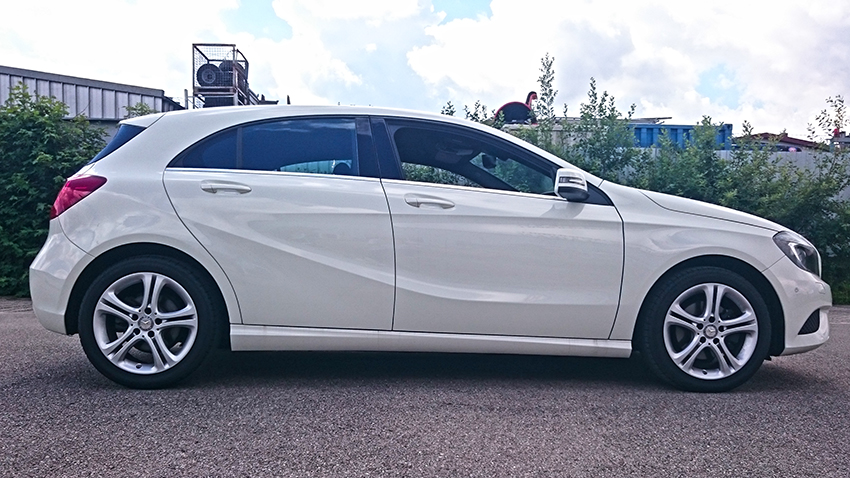 I remember very well – it was 1982 and Mercedes introduces the 190. A Mercedes for the middle class. Many people – at least in Germany – thought that would never work. 30 years later, we had the same discussion again. The middle class Mercedes already became an all time best-seller and now, Mercedes is introducing a new compact-car, a direct competition to the Golf, the Astra, BMW series 1 and Audi A3. Just a typical hatchback which already won, at least with the top of the list  AMG model, a lot of tests against the strong competitors. And it looks pretty good, even with the smaller motors. 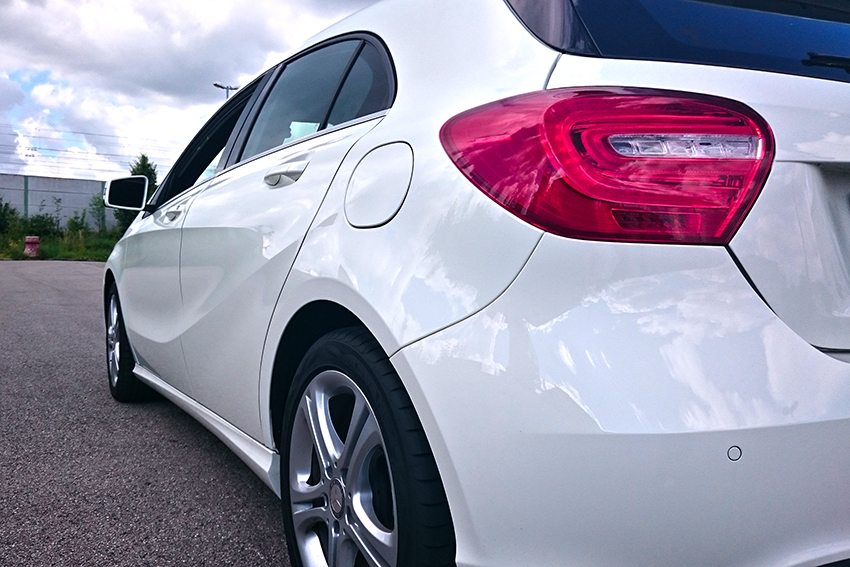 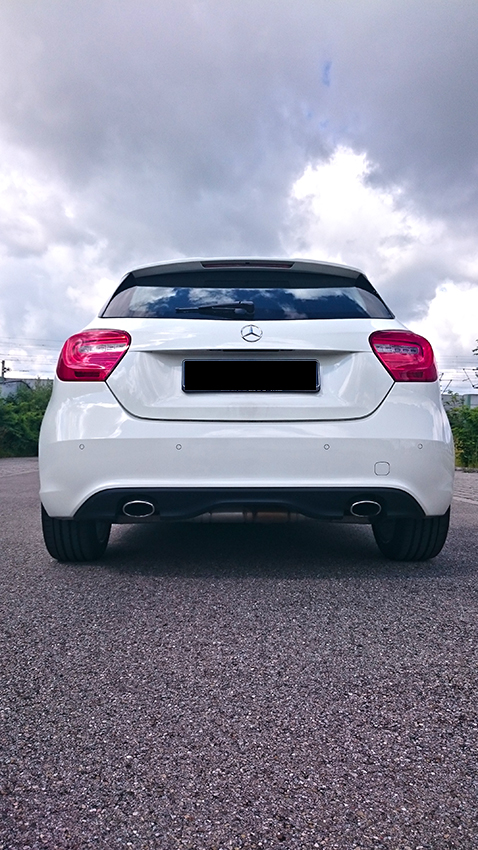 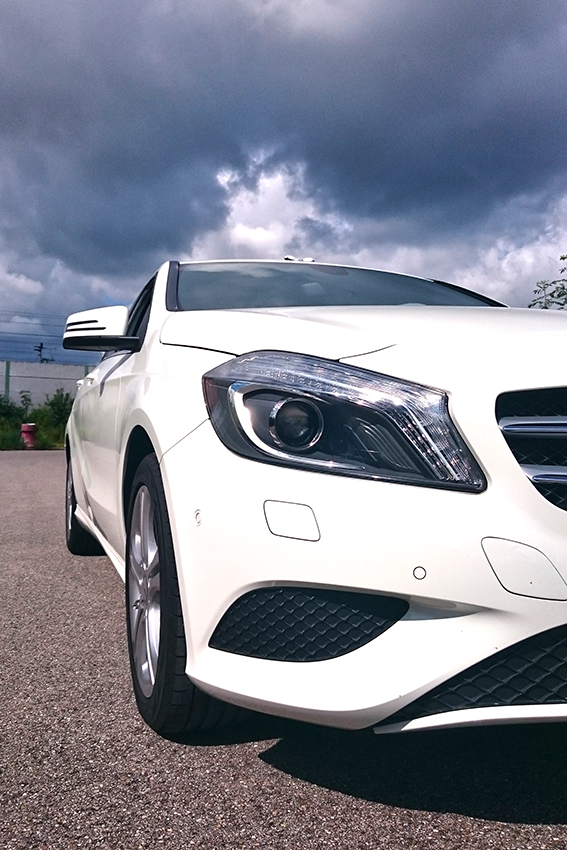 Here in Germany the A-class starts with a 23.700 Euro price-tag. Almost new but used cars can be bought for around 20.000 Euro, a bit older cars with more milage for many thousands less. For this test I chose a pretty new, valuable and still nicely equipped model, a car which would probably be bought by the average customer. That means I am driving a A 180 (petrol) with the 122 hp and 1.6 liters engine today. The 5-door car is offered as base model, as „style“, „urban“ or AMG. I did take one with the „urban“ package which means: If you order the package new, it will cost you about 1800 Euro and you will get 17 inch rims, a double-flow exhaust system, nice sport-seats and some different optical upgrades.
In addition, my car comes with the Audio 20 system including Map-pilot, a parking assistant, Xenon headlights and some other goodies. 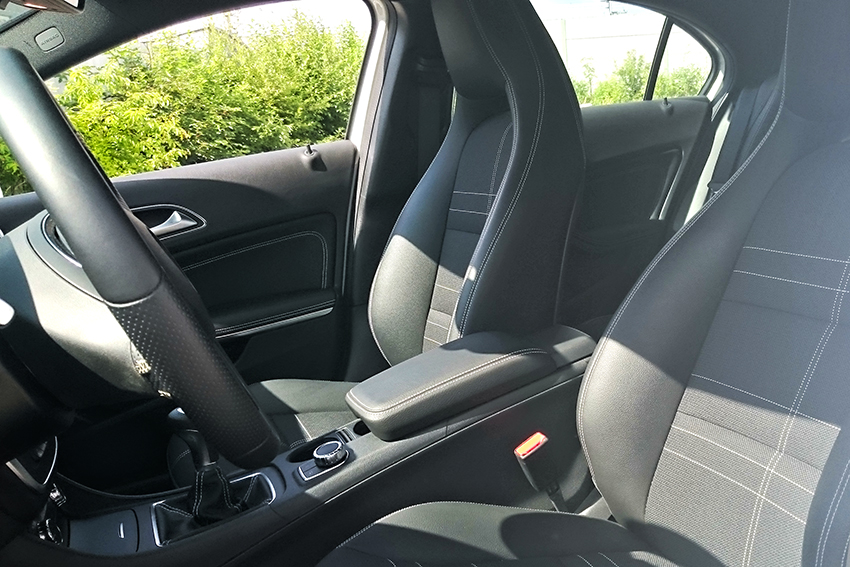 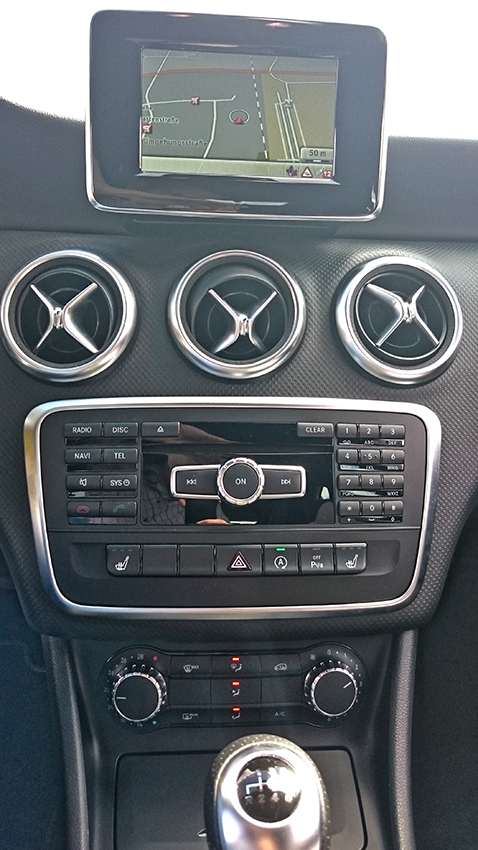 So, let`s enter the car. The seats are not just good looking, they are also very comfortable. A great mixture of sportiness and comfort and still good for a person like me, almost 2 meters tall with a good upholstery and some manual adjustment possibilities. In addition to this, the steering-wheel can be adjusted very far in hight and range which makes it really easy to find the perfect position for the driver. I wonder why this is so much better than in many other cars. Is it really so difficult to build for some of the other car makers? At least – here it`s perfect! The rest of the interior looks also good and upmarket and it includes power mirrors and power windows. But enough said about all that, let`s start the engine and hit the road. 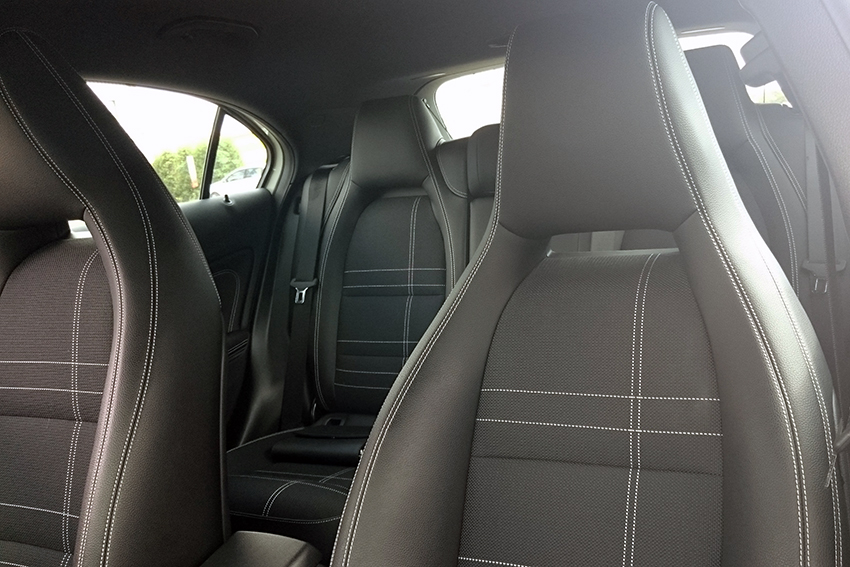 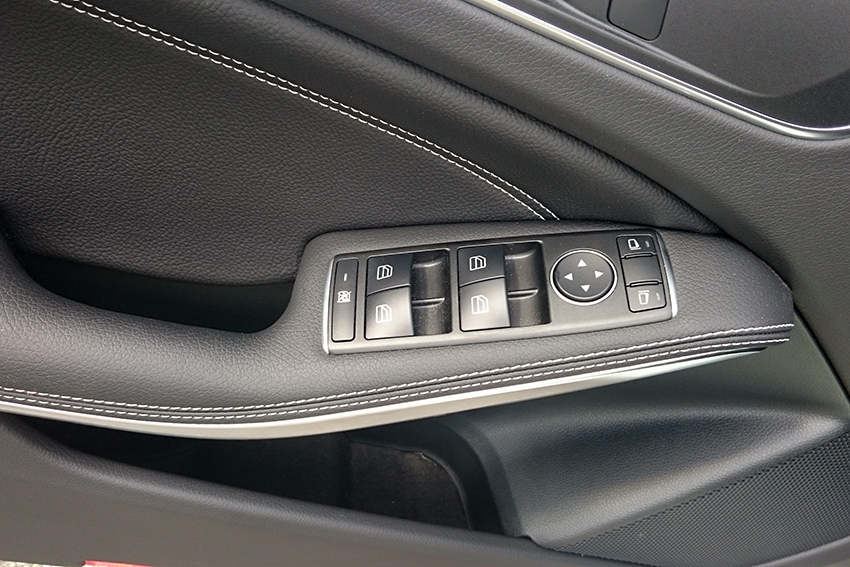 The Stereo-system Audio 20 is better than you may think and it should be good enough for most of the customers, especially because the radio tuner is great, like in all Mercedes models I have driven so far. The Map-pilot system with the 7“ display is easy to use and you can get it for 595 Euro. Most of the other stuff is also pretty much self explaining, at least for the experienced driver. No big secrets, all is clean, all is well built and well planned, it looks good and feels good – so you could say – a typical german automobile. 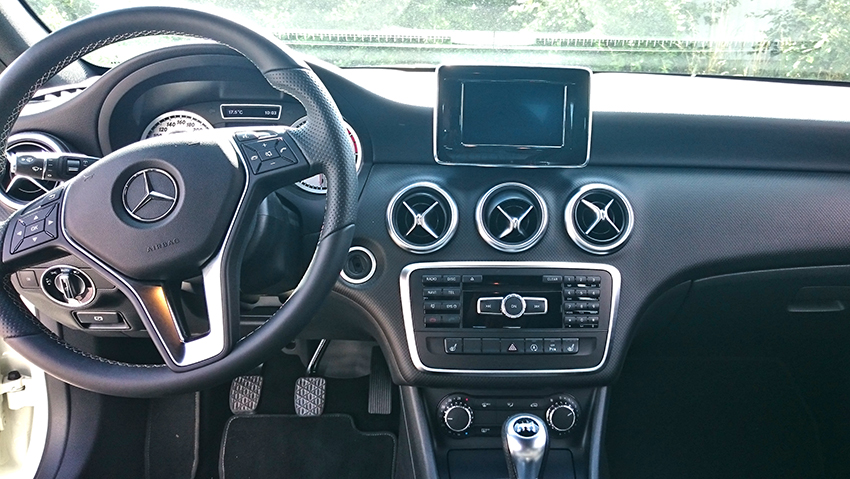 The trunk can take 341 liters. Thats not huge but would be good enough for me. The backseats also seem to be more than ok. Of course, almost nobody would be able to sit behind me but this is the same in way bigger cars, so nothing to complain here. 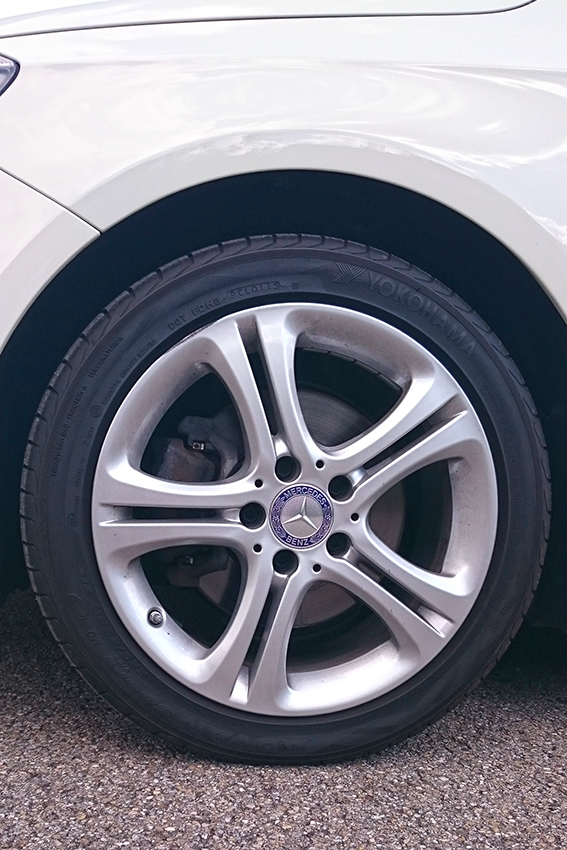 Time to talk about driving performance. The brochure says 8.9 seconds from 0-100 km/h and a top speed of 202 km/h. I personally think that the engine feels kind a tired at the beginning, let`s say from 0-30 or 40 km/h. At least I would have guessed it`s more a 10 seconds from 0-100 km/h car. But as soon as you are at a medium speed everything is ok again and it feels better. I think for many people the A 180 still maybe a god choice. Its absolutely good enough for big city driving and even for long distance journeys. For sporty drivers I would recommend the A 200 or higher. This will make you happy on curvy country-roads and on the Autobahn, too. And that brings me to the suspension. Don`t get me wrong, the stock suspension is far away from bad. Actually, it`s a good suspension which tries to make everybody happy. But on the other side, if you are not everybody because you are a sporty driver, than you may give a thought to the new coilover-kit made by ap-Sportfahrwerke. Together with some more horse-powers under your hood you will get a very modern and handy car with the famous star from Mercedes on the grill and lots of sportiness and premium feeling inside. 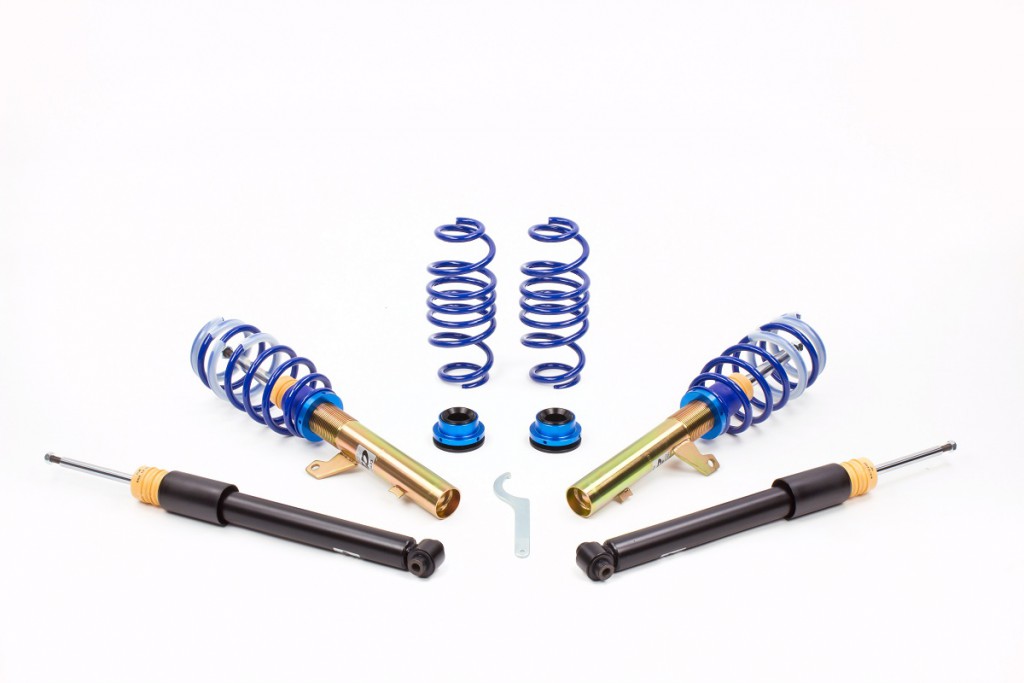 By they way,  if you would like to get a sporty lowering with a plus of safety, you will get an ap coilover suspension already from 569 Euro. Beside a sporty driving behavior, the coilover kit developed by ap Sportfahrwerke also allows a variable lowering. In the contex of the part certificate, a lowering of 25 – 55 mm at the front axle and 30 – 60 mm at the rear axle can be selected. In addition, the ap coilover kit convinces with a more direct steering behavior and a residual comfort suitable for everyday use.