Like fire and ice – Max and his Volkswagen Golf 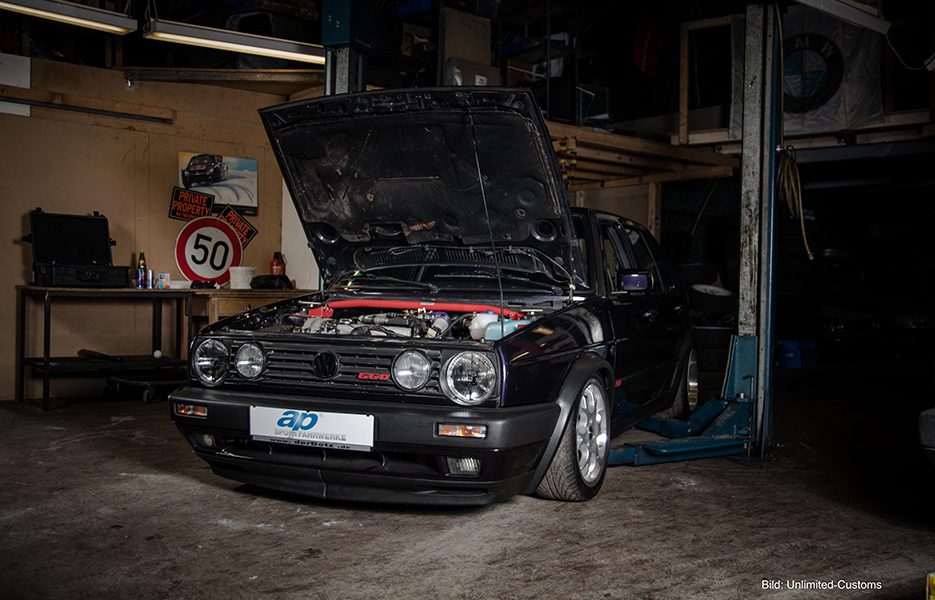 My long-time project is a Golf 2 fire and ice 5-door from the year 1991. It had 90 hp and not many features. But within the last 10 years the car got many upgrades and changes. It looks actually pretty stock from the outside besides some minor details like the G60 extension, rear window without heating filament and Hella headlights with hairline cross. 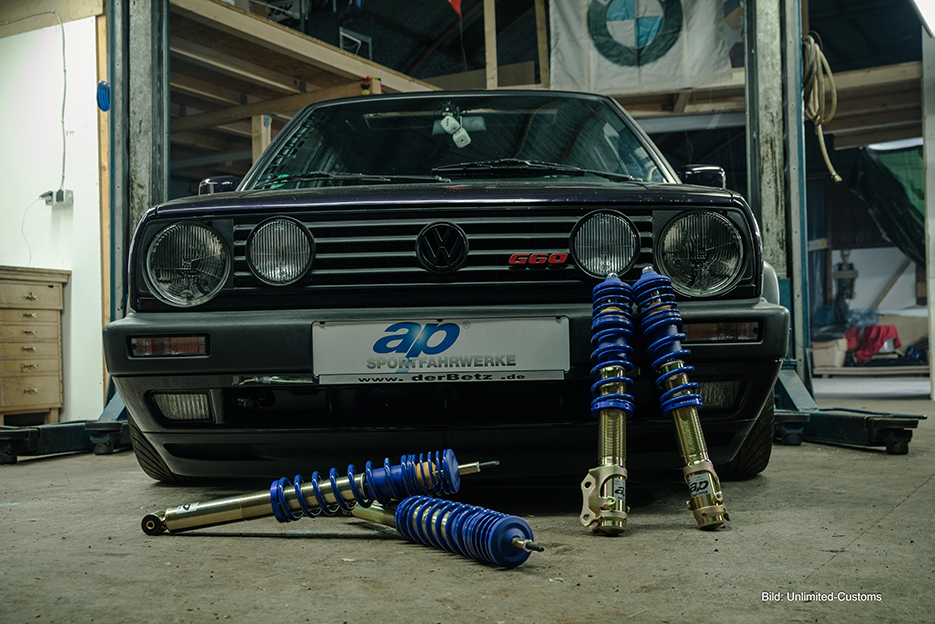 Where and when did you buy it?
I bought it by the end of 2008 from a good friend after a truck crushed my former Golf pretty bad. I could pay it in 3 installments and I also could leave the car at my friends barn for some weeks during winter. 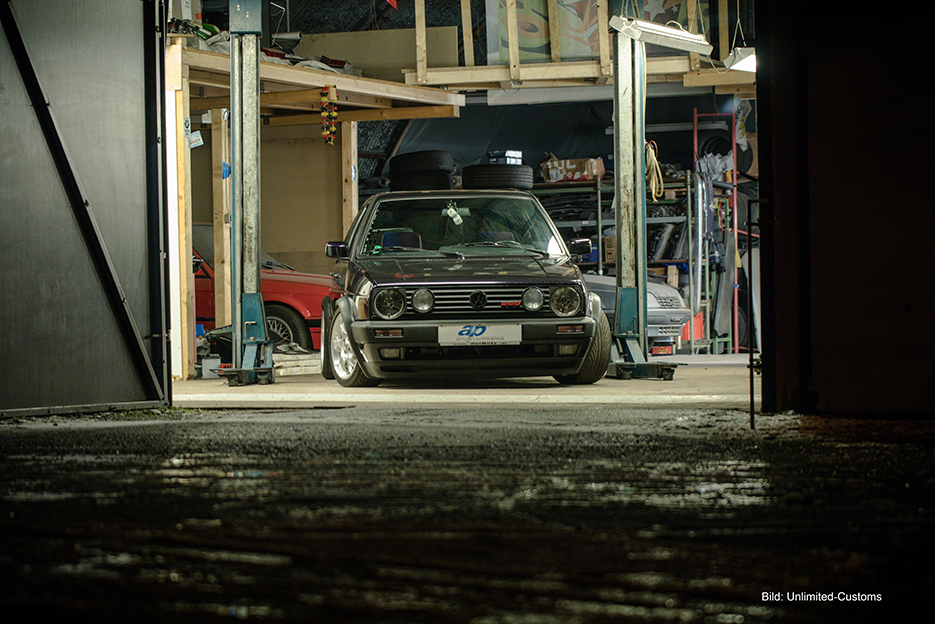 How was the all over condition oft he car back than?
The car was pretty much stock, besides oft the Borbet BS rims. It had a milage of 185.000 kilometers, no rust but it had some minor damage of hail. The interior was pretty much ok, but the carpet was full of fag burn from pre-owners. Technically everything was fine and the car was ready to roll. 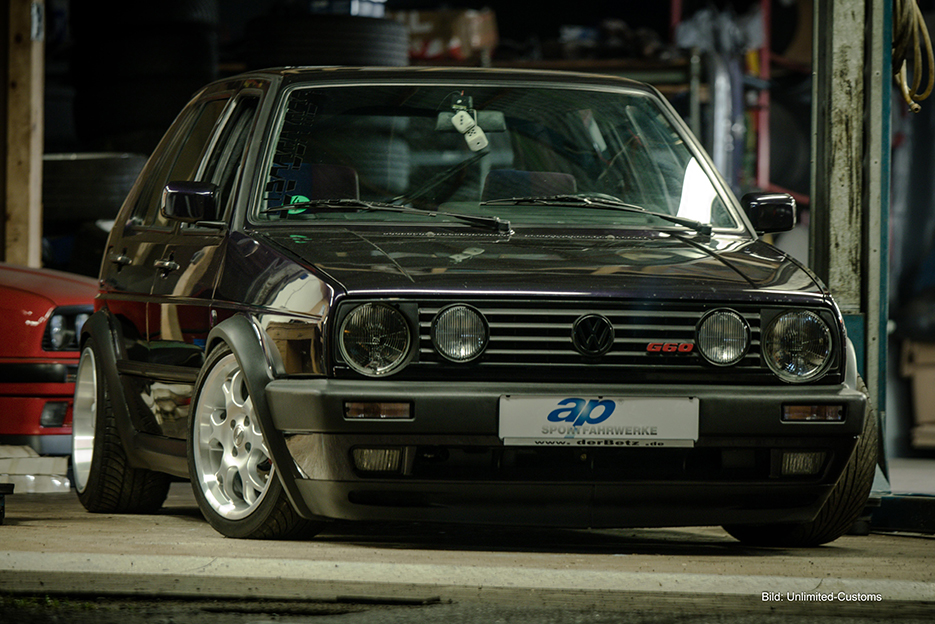 Which changes did you realize over the last years?
Well, I started the way many people started their tuning-projects back at the days. Headlights with clear glass, a cheap coilover-kit and a sport exhaust. But after buying an old G60 body I have undone all this. I took freshly redone axles out oft the old G60 as well as an ap-coilover-kit. In addition I bought a G60 brake system and a Mark20 ABS-system from a Volkwagen Corrado. In the year 2011 VW classic parts announced, that they will produce the G60 wide body extension again and I ordered it even before they started the production process. That was the time when I started to redo the bodywork and the suspension set-up. I got some used G60 fenders and I also adjusted the wheel-arch to the wheels. Time for the interior! I added some extras like: heated seats, power mirrors, power windows, a power sunroof, a height adjustable co-driver-seat, a central-locking system and some more. 2013 was the time when I took the car for a ride to the first car-meet, the annual Fire&Ice meeting the Edersee. People liked the car and I had a great weekend. The bad thing was, I had serious trouble with a very high oil-temperature on my way back. Well, I was thinking about an engine rebuilt for some time anyway and after that incident, I just started to do it. I had a wish for power and just everything new. Actually, this project is still in process, because I am constantly changing stuff. At the moment the engine is pretty much a mixture between a Golf 2 G60 and a Golf 3 GTi 8V. Of course, there are many things that I had to change. I also galvanized all the screws and steel parts in yellow, all seals are new and the harness is custom made and that is just a small part of all the changes which have been necessary. The biggest problem happened when I tried to start the engine, because the normal started would not do it. I also added VDO controls, a new center console, plasma illumination and a different exhaust system including a Friedrich Motorsport header, a 200 cell-kat from HJS and a 3“ exhaust system, also from Friedrich Motorsport. In the moment I am working on the fitment oft he tailpipe. 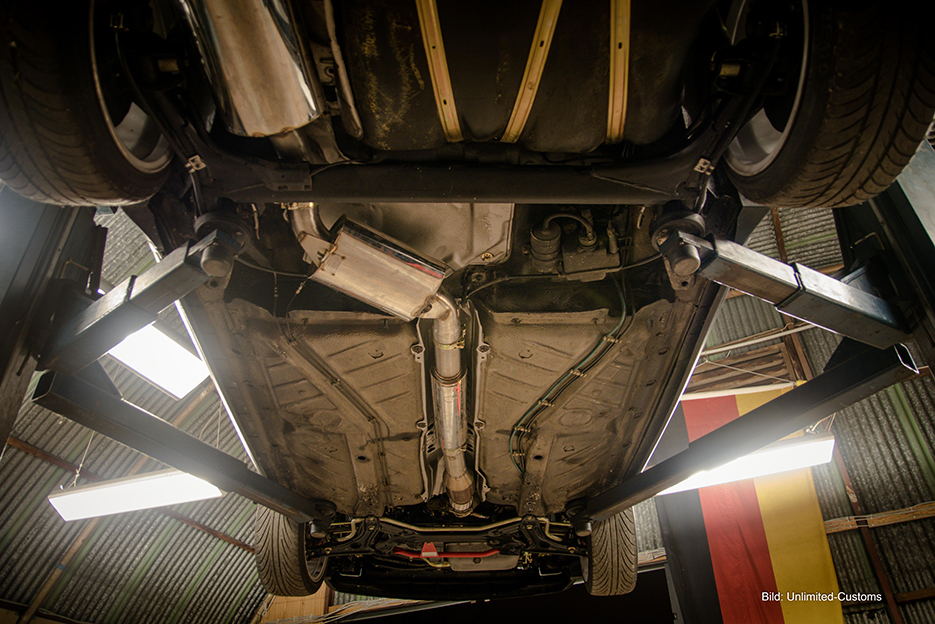 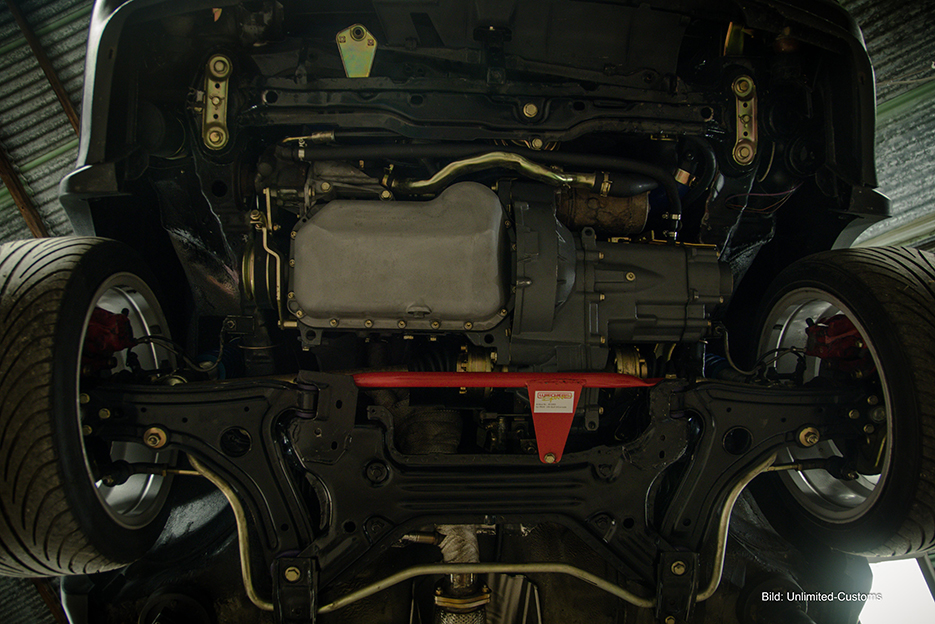 How did you start your project?
Everything was done accordingly to my skills at that particular point of time. Luckily my skills did increase over the years. I did it step by step, whenever I had money and time, starting in an old barn with not much. Now, I have access to a hall with a hydraulic ramp, good tools and some friends with a lot of experience. 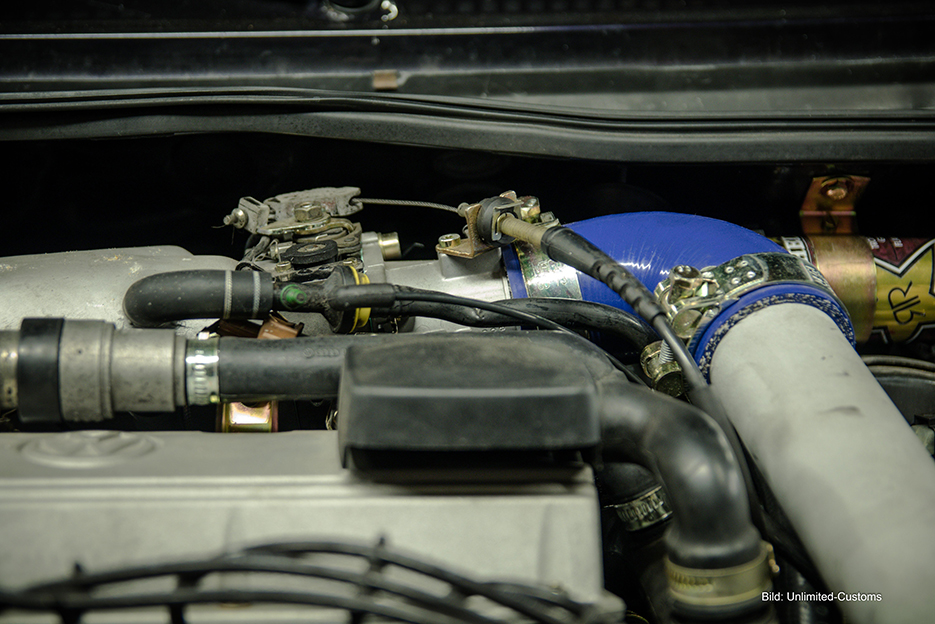 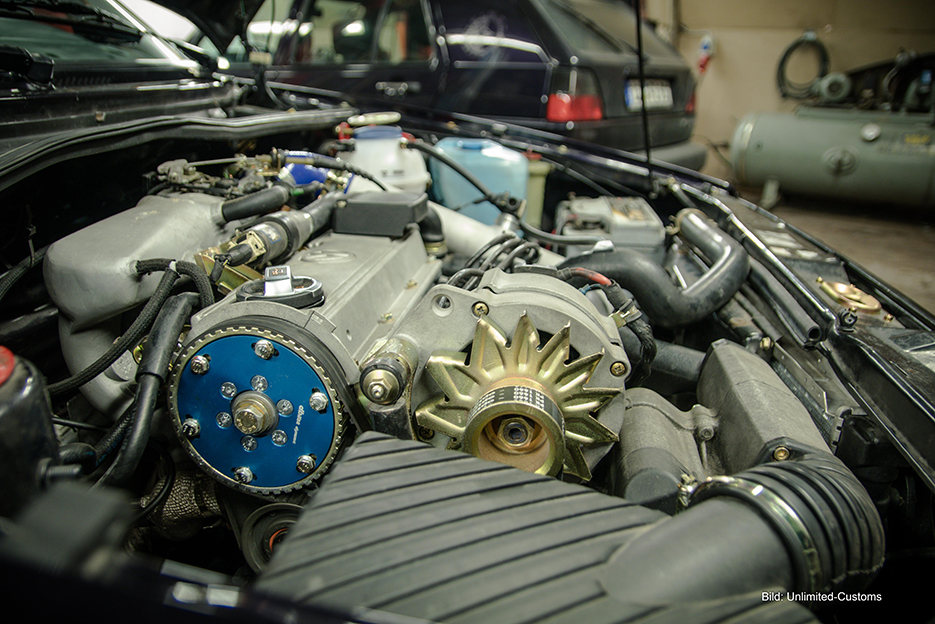 Cost?
Definition of hobby: „Maximum waist of time and money with minimum benefit.“ To be honest, I never really counted all the money but I think it is an amount somewhere between 15.000 and 20.000 Euro and there is no end! 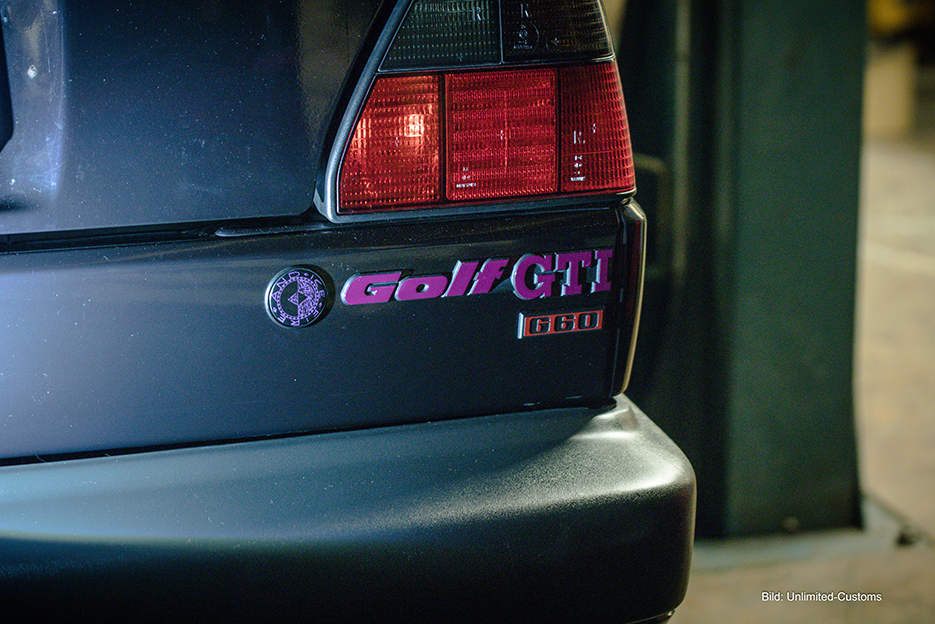 Tell us some about yourself
My name is Max Randl, I am 29 years old and I am from Murr in Germany. I am a salesman in foreign trade and I am basically not involved in cars when it comes to my every day job. So, it really is a hobby for me. Being a single parent I also have one big and more important thing in my life than the car. 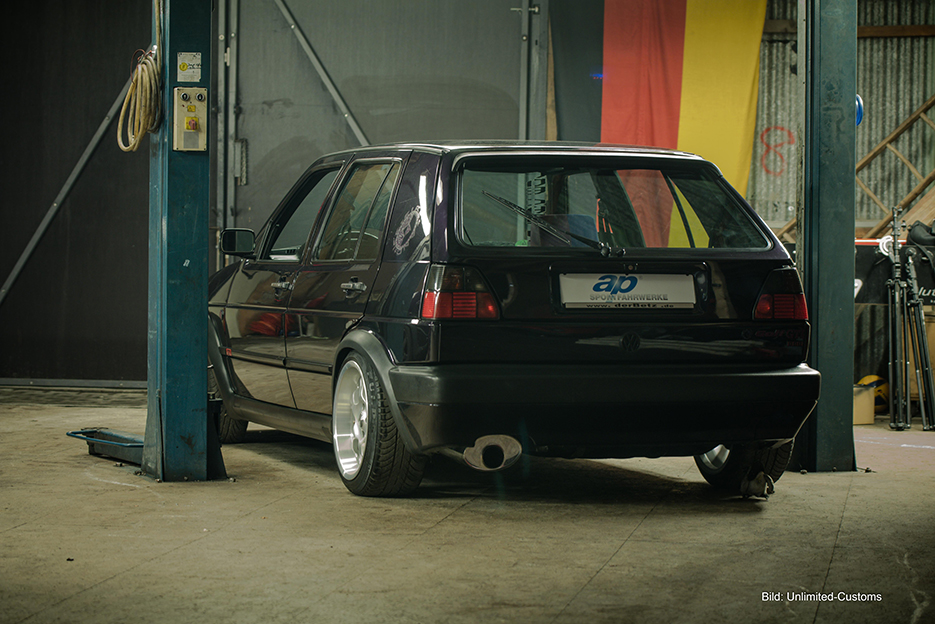 Do you want to share any problems or setbacks?
Lots oft them! Mostly because of me, not knowing or understanding things. But the bottom line is, you can do everything if you really try hard to figure it out and if you find the right person to ask, because there is always somebody, somewhere who knows. 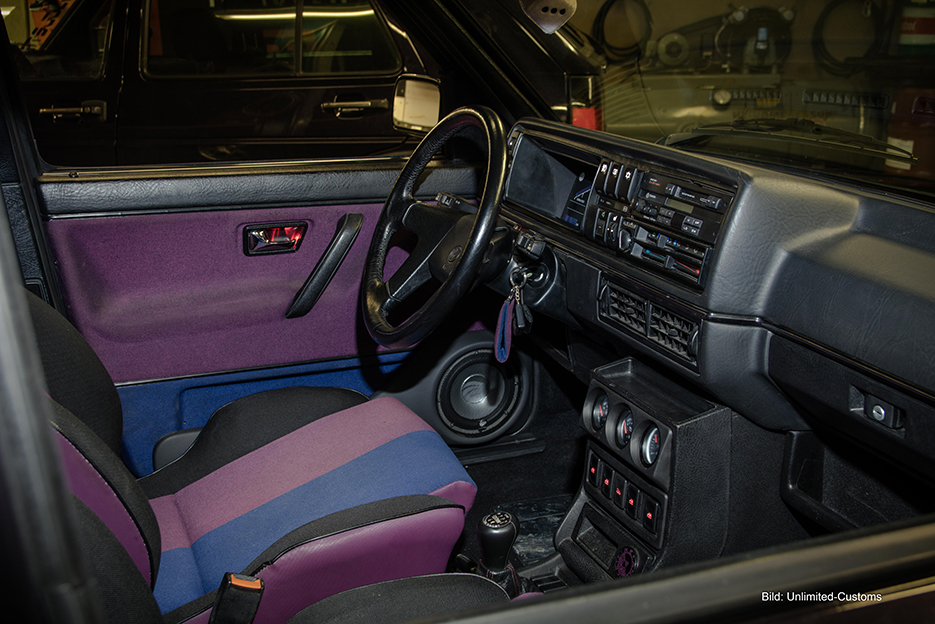 Any funny stories?
Of course, but I can`t tell in public! 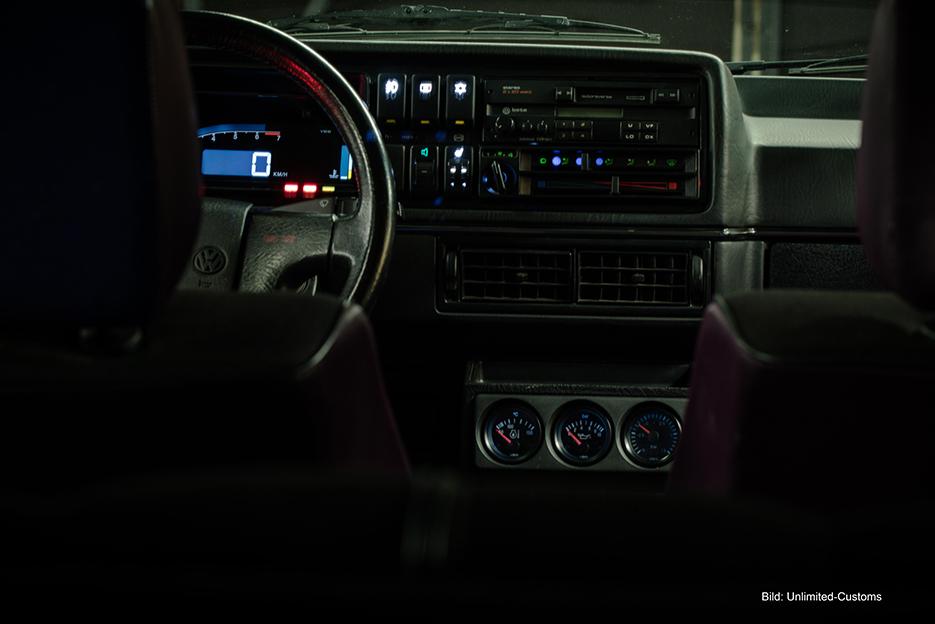 Are there some special highlights like trophies, foto-shoots or something like that?
Unfortunately not but this has to change. 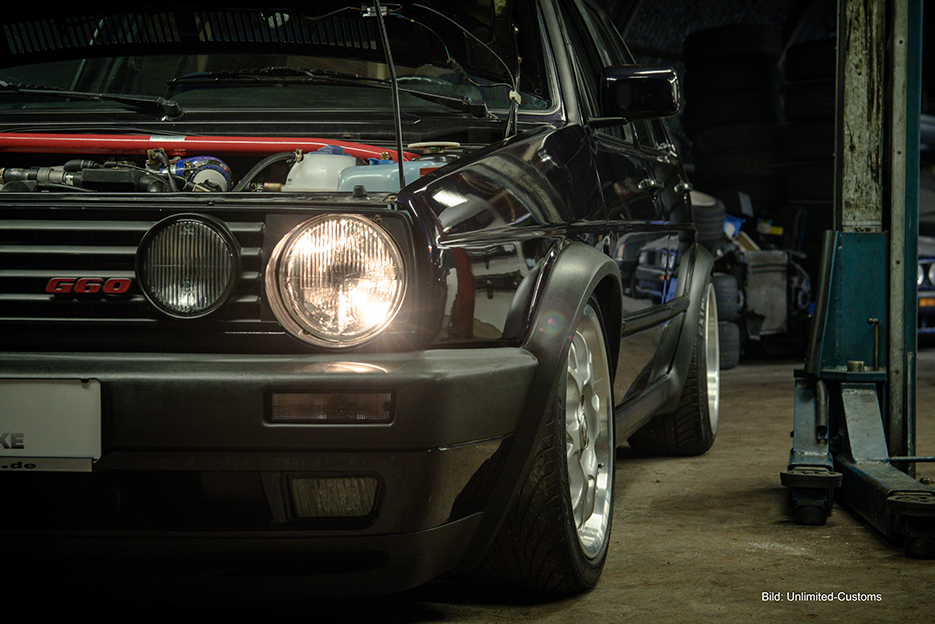 What is your goal and will the car be finished some time?
2013, the optical side of the car was finished. But, it will never be 100% finished, I guess. When the engine will be finally done than I have already new plans: new paint, other rims on the front and some other stuff. 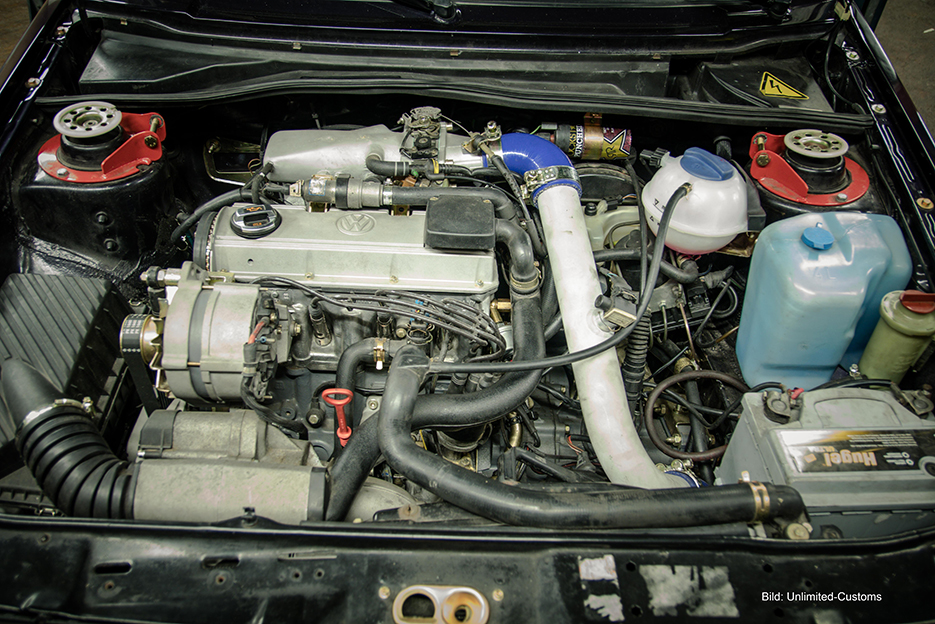 Where can we meet you and take a look at your car?
Actually I am hoping that the car will be ready for a complete season in 2019. Season-start Breunigerland Ludwigsburg, car-meet of the VW-Freunde Auenwald and the Bitburg Classic.

Key-data of the car: